The Everest region is one of the most popular trekking routes in Nepal and in the world. It offers a wide range of mountain views and developed trail to Everest Base Camp.

The trails are steep through foothills of the world’s highest mountain. There are lots of villages of Sherpa and interesting hiking and excursion places.  The Everest Region is located in the eastern part of Nepal in Solukhumbu district the village of Sherpa and monasteries. Most of the trekker’s goal is the Everest Base Camp at an elevation of 5357m from where you can see the Everest 8848 meter. Besides Mount Everest, there are three 8000 meters above peaks like Lhotse, Cho Oyu, and added numerous other peaks of lesser altitude. There are lots of interesting sides for hiking and excursions village of Sherpa.

The trails are steep through foothills of the world’s highest mountain. There are many trekking lodges from place to place along the trails. Thousands of trekkers, mules, and Jokpas make the trails busy and crowded to wait for a long time along the trails.

The Everest Region has three trekking routes are Thame, Gokyo, and Everest Base Camp and also who like to do three passes from west Rengo Pass, Chola, and Khongma La is adventure passes. Namche Bazaar is a big and beautiful Sherpa town gateway to Everest, Gokyo Lake, and Thame. In Namche, there are numerous cafes, trekking gear-shops, grocery stores lodges and hotels. It has internet access, Wi-Fi, money changer cash, banking service changer cash and the accept Visa and Master Card.

From Gorak Shep, Early in the morning, we walk up to Kala Pathar (5546m) for sunrise view on the Everest. In the busy season, the trail is crowded with trekkers who are exhausted due to climbing steeply and high altitude less oxygen. Spending time for snapping the Everest and its side mountain, we dismount to Gorak Shep. Just to get ready for our backpack. At the time of scheduling, the helicopter will arrive to pick us to Kathmandu.

On this day you are busy sightseeing in Kathmandu Valley. Tour of Buddhist and old Hindu temples which are regarded as a shrine and local traditions. There are many places to visit.

Lukla to Phakding trail is easy and gentle. The trail heads through the north of Lukla you are asked to register permit and belonging value able things. Leaving back Lukla the trail enters the village of Cheplung where Jiri trail joins. Just beyond Cheplung, the path enters through a forest then to Thado Koshi has a cluster of trekking lodges. From Thado Koshi is to see views of Kusum Kangru (6387m). Passing Thado Koshi to Ghat village is situated on the bank of the Khola. The village has many lodges and guesthouses along the trail. At the top of Ghat is with mani walls stone carved with black and white with Tibetan mantras, white chortens , and prayer wheels. From here the trail climbs down then flat along the Dudh Koshi Khola. A short climb up into the village of Phakding has a dozen lodges. It is divided into two parts by the Khola (River). If there is extra time then about 40 minutes steeply side trip Rimjung village and Pema Choling Gompa.

Today’s walk is relatively longer than yesterday. As you start the trek a suspension bridge is crossed over the Dudh Koshi River and the trail follows up along the river through forests of pine. The gentle trail past Zumpute, Thamserku, Manju and Jorsale up and down crossing several times over the river. While trek we can see the majestic view of Thamserku Peak (6608) charming of Dudhkosi River.

From Phakding 3 hours walk we reach the village of Monjo is a pretty settlement where the entrance checkpoint for Sagarmatha National Park. From the check post, the trail dropping to re-cross the river and then to Jorsale has about half a dozen nice lodges. Passing Jorsale the path re-cross the river then enters through a grove of pine on the bank of the river confluence of Bhote Koshi and Dudh Koshi rivers. From the confluence steep trail crosses a long suspension bridge festooned with prayer flags.

The trail to Namche Bazaar climbs steeply through forests of pine and about halfway up is Everest Viewpoint where there is a public toilet. The gentle climb and wide path leads you to a check post then continue up about 20 minutes to Namche Bazaar.

Namche Bazaar is a big and beautiful Sherpa town gateway to Everest, Gokyo Lake, and Thame. Acclimatization day is important for trekkers who prepare to go high altitude. One day acclimatization will improve fitness and help adjust altitude in a further trek in elevation. In Namche, there are numerous cafes, trekking gear-shops, grocery stores lodges and hotels. It has internet access, Wi-Fi, money changer cash, banking service changer cash and the accept Visa and Master Card. In the main trekking season crowded of foreigners are at shops, lodges, cafes, and streets.

The trail to Tengboche starts from just above Namche Bazaar on the right side. The slop trail out and in passes ridges at the end of the bluff memorial chorten to Tenzing Norgay. From this memorial place is for grand panorama views of Thamserku, Ama Dablam, Lhotse, and Everest. The path continues to Kyangjuma (3550m) where there are two nice lodges and closer views of Ama Dablam.

From Kyngjuma the trail descends to Sanasa just before it a signpost directs Gokyo Lake to hillside and downhill to the river Phunki Thenga where a suspension bridge is crossed to climb a hill, on the way beautiful rhododendron flower in the season. Tengboche has a wide grassy land, lodges and Tengboche Gompa is a large and most popular monastery in Khumjung region. Mountain views are seen in every direction.

From the river, the trail climbs to Chorten and Kani while Amadamblam view is and Mt Lhotse is panoramic. From Kani 10 minute further is Pangboche village (3860m) where there are several lodges and guesthouses. Above Pangboche the trail enters on arid landscape and alpine meadows along the Imja River.

The gentle path leads you Shomare (4000m) has tea houses and lodges a little walk up finally Orsho place comes beyond on arid the route separates upper and lower. The upper route is to Pheriche. The lower route ascends to Khumbu River over it a bridge is crossed and then climb up through alpine meadows passing chortens and cairns to Dingboche village from where Lhotse (8501m) Island Peak and Ama Dablam can be seen. Dingboche village is pleasant and agreeable. There are internet service, bakery, cafes, and grocery stores. Several lodges and guest houses are throughout the village.

It is important to do acclimatization at 4410m. Many trekkers love to spend to explore in Dingboche village. There are several interesting hiking spots are Nangkar Tshang, Chukung, and opposite side up at the bottom of Ama Dablam. Nangkar Tshang is the best viewpoint (5075m) walking is two hours just above Dingboche on a ridge that offers panorama views of Ama Dablam, Lhotse, Taboche, Cholatse, and even Makalu (8465m). Valley views are enjoyable and fantastic.

From Dingboche to Chukung it takes about 2 hours. The path is agreeable through on arid along the Imja Khola. Chukung is surrounded by mountains and glaciers. There are enough lodges. Two hours walk to popular Island Peak Base Camp from Chukung.

From Dingboche, the trail to Lobuche goes left side passing above Pheriche at the top of the ridge. On the way, there are outstanding views of Taboche, Chilatse and Ama Dablam. The path passes through opened and arid yak pasture lands. At the end of the trail, a glacial stream is crossed and then reaches Dughla (4620m) has Yak and Kala Pathar lodges.

From here the trail climbs up the grave ridge which is covered with memorials who lost their lives while climbing Mount Everest. A gentle walk to the north Dzonlgha trail meets from this point it is a 40-minute walk to Lobuche where you get enough trekking lodges.

Lobuche to Gorak Shep takes about 3 hours and Gorak Shep to Everest Base Camp Visit and return back to Gorak Shep about 5 hrs. From Lobuche straight path follows through a gorge between glacial and mountain wall. Switchback to the edge of the trail before the climb up then walking on the ridge through glacial boulders. Famous Khumbu Glacier lies down south to north.

Finally, steep climb reaches Gorak Shep is a flat and sandy wide destination night. There are 4 lodges and a porter shelter. The lodges are almost packed every day. Just left side above Gorak Shep soars Kala Pathar and flat right trail historical place EBC. The Everest is not possible to see from Gorak Shep. It is blocked by Nuptse. North direction Pumori, Lingtren, Khumbutse, and Changes are grand views. Khumbu Glacier is awesome.

After a lunch side trip to Everest Base Camp takes about six hours to return 200m ascent. The walking path is across the Khumbu Glacier at the north end of the sandpit at Gorak Shep. Glacier path makes to walk difficult and tired. The atmosphere at the Base Camp can be fantastic. Prayer flags and banners festoon rocks and stones.

Most of the groups climb Kala Pattar (5546m) early in the morning to see the sunrise and best views of Mt Everest. Mornings are usually clear and the best time to make the ascent. For many people, this is the highlights of the trek. The path to Kala Pathar climbs up the grassy land above Gorak Shep.

Just follow the long line of snaking hillside. To reach Kala Patthar (5546m) from Gorak Shep takes about 2hrs which is marked by prayer flags. As you reach the top of Kala Patthar amazing views of Pumori, Lobuche west, Nuptse, Lhotse, and Everest. Descending to Gorak Shep make you feel easy and enjoyable south to the lower ridge. After breakfast fly to Kathmandu. 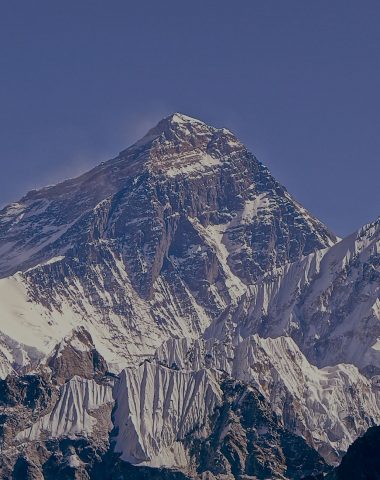 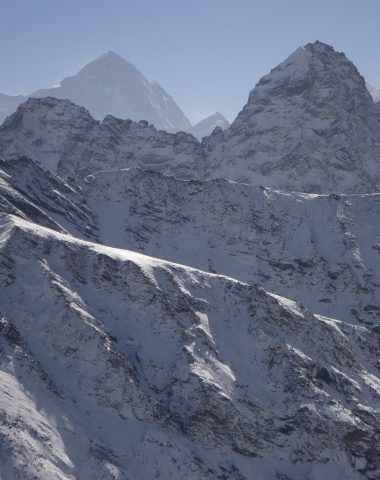 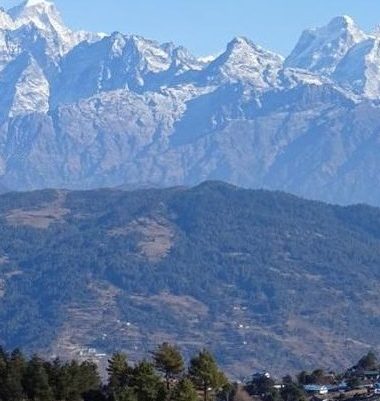 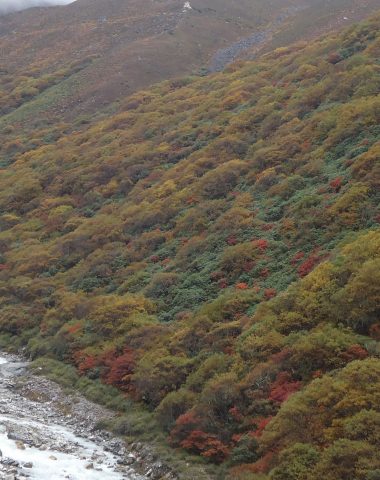 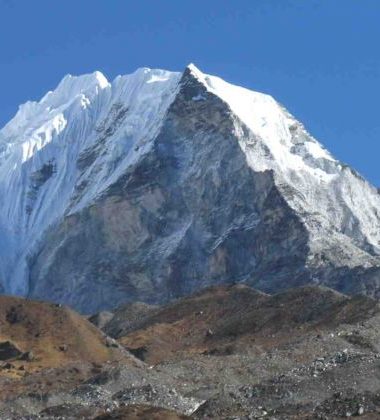 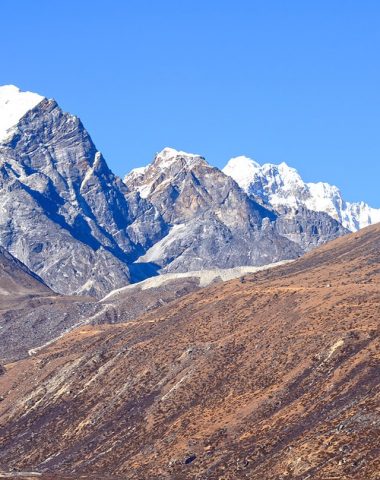 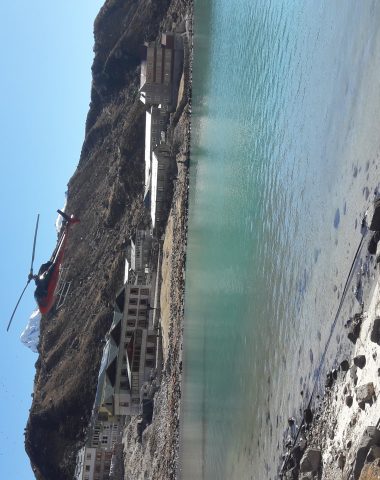 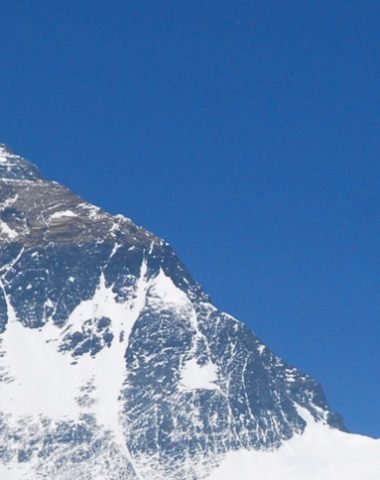 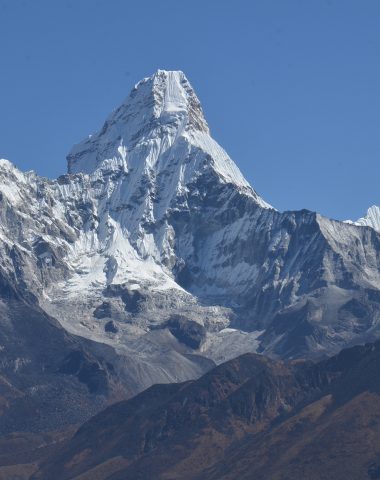